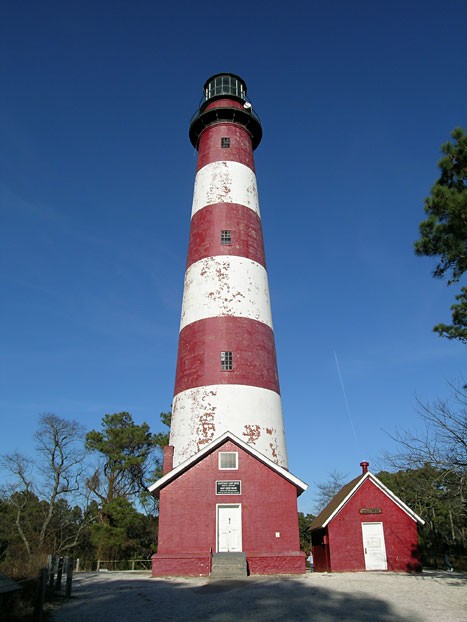 In the early days of ocean commerce, ships relied almost solely upon beacons of landward light to avoid mishap upon the rocky shoals and sandbars of treacherous coastlines. The establishment of coastal lighthouses was an important factor in avoiding said fate and many of their lights continue to protect and direct vessels to this day. The historic and striking Assateague Lighthouse is counted among their number.

Before 1833 there were no such guiding lights along the Atlantic Coast between Cape Henlopen, on Delaware Bay, and Cape Charles, on Chesapeake Bay. As commerce grew, so, too did the necessity of such a guidepost. In 1830, Congress appropriated money for a lighthouse halfway between these two important ports and, in 1832, Assateague Island was chosen for the honor.

The first tower’s 45 foot height proved inadequate, however, so work began on Assateague’s new, much taller, brick structure in 1860. Interrupted by the Civil War, the much improved lighthouse was not put into operation until 1867. Built of red brick, the conical, 139 foot tower’s active, rotating light is visible from up to twenty-two miles at sea.

Assateague Lighthouse is architecturally and environmentally striking. A beautiful structure of brick walls and floors, featuring arched windows and entrance, it received its distinctive exterior of alternating red and white bands in 1963.

Located in the pristine Chincoteague National Wildlife Refuge, Assateague Lighthouse shares the island’s marshes and beaches with wild horses, native white tailed deer, Sika elk, and colorful, endangered waterfowl. Wooded trails and bicycle paths meander the reserve and there is a beautiful beach with a bathing area at the island’s southern tip.

Assateague Lighthouse is open for tours from April through November. On summer weekends, local artisans display their work next to the lighthouse in the “Oil Shed.”