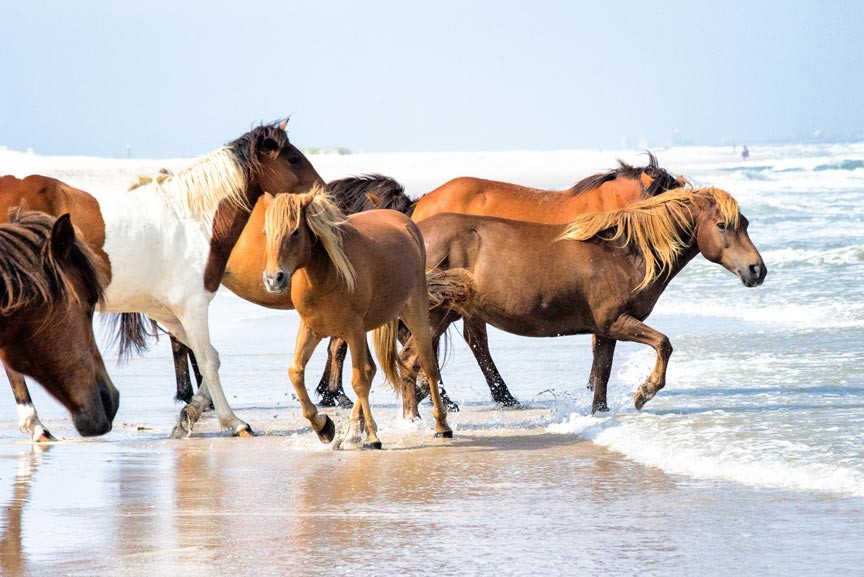 Chincoteague Pony Swim 2019 is almost upon us and now is the time to plan your visit to the island for this rare and amazing annual spectacle: July 24, 2019.

Our historic Chincoteague bed and breakfast, Miss Molly’s Inn, is less than a mile from the Chincoteague Fairgrounds, where so much of next month’s activity takes place.

Both are here for any and all of your Chincoteague adventures – some of the most exciting of which occur during the month of July! Of course, that means you should book your Chincoteague accommodations sooner rather than later, before they all get snapped up!

The wild ponies of Chincoteague spend most of their lives roaming on neighboring Assateague Island. Though essentially free, they are looked after by the Chincoteague Volunteer Firemen, aka: the c.

Maintaining a healthy, sustainable herd includes limiting the number of horses on the island. Rather than cull these beautiful horses, the annual pony swim provides both a health check and an auction of foals.

The ponies will swim the short distance across the channel at slack tide, sometime between 8am and 10am on Wednesday, July 24, 2019. The ponies will then rest for about an hour before being led to the carnival grounds.

Foals are auctioned on the carnival grounds at 8am, July 25th, 2019. Winners will receive certificates of purchase from the Chincoteague Volunteer Fire Company.

The annual pony swim and auction coincides each year with the Chincoteague Fireman’s Carnival, making for lots of fun. Proceeds from both the pony auctions and the carnival go towards caring for the remaining horses for the rest of the year.

That’s right: you can win your own wild Chincoteague pony. Of course, you’ll want to make sure you have room in your car or bicycle basket to take it home first, not to mention a spare bedroom for when you get it there … but yes, you can win one!

The first foal to come ashore during the swim each year is given away in a drawing at the carnival grounds bandstand at 7pm. Tickets are sold at the carnival each night as well as just prior to the swim. You must be present during the drawing with your ticket to claim your pony.