Each July, thousands of people from all over the world come to the small island of Chincoteague to watch the wild ponies swim across the Assateague Channel. 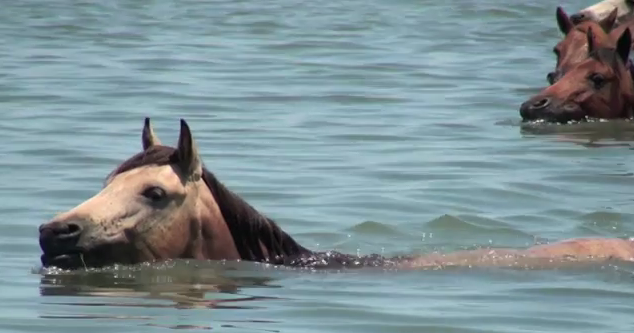 It’s a festive occasion. People get up early and cast about for the best vantage points. Those who brave mud and water are rewarded with spectacular views of the horses as they come ashore. Everyone encourages the horses with cheers. Everyone feels happy and relieved when they finally make it across.

The wild ponies of Assateague are not rounded up to entertain the masses, though that is a pleasant perk. The round up is a form of population control. Without thinning the herd, the wild ponies would soon overpopulate the island and damage the delicate ecosystem of Assateague. The event is also a fund raiser for the Chincoteague Volunteer Fire Company. 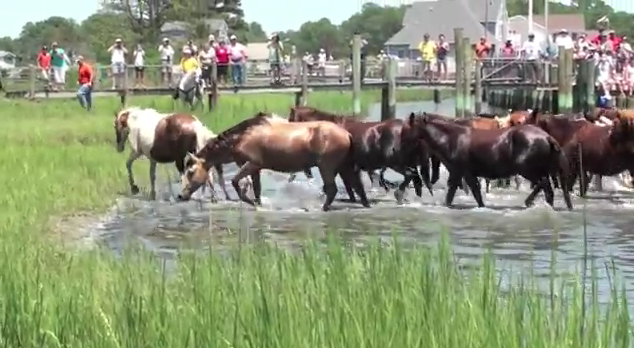 You could be there this year.

Once the wild ponies are safely penned at the fair grounds on Chincoteague Island, most of the foals will be auctioned off to the highest bidder. Up to 5 foals are designated as “Buy Backs”; they’ll be returned to the wild with the adult ponies after the highest bidders name them.

Anyone can bid on a pony, so if you’re just there to watch, be careful not to raise your hand at the wrong moment.

The Pony Swim is an old tradition here on Chincoteague; 2012 is its 87th anniversary. If you’ve never witnessed it, perhaps it’s time you did.

We still have availability at Miss Molly’s Chincoteague Island Bed and Breakfast during the pony swim. Just imagine seeing the famed wild ponies of Assateague without worrying about your car. Wake to a gourmet breakfast, then stroll into the melee when you’re ready. It’s a short walk from our Chincoteague inn to the fairgrounds, where the carnival is held in the evening and where the auction is held on Thursday morning.