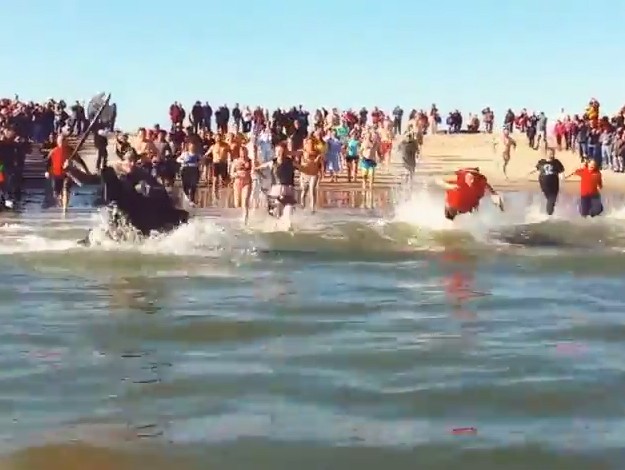 Into the water at the Chincoteague Polar Pony Plunge

If your idea of a good time includes wearing a wacky costume while jumping into frigid sea water, then the Chincoteague Polar Pony Plunge may be just the thing you need to kick off your New Year!

Hard as it may be to believe, 2014 is just about over and celebrations for the new year are being prepared. New Year’s Eve is a great time on Chincoteague Island, with an annual concert at the Island Theatre and the Pony Island Horseshoe Drop & Costume Promenade at midnight – but how do you keep the next day – the first day of 2015 – from being an anti-climatic let down?

On the afternoon of New Year’s Day, recovered revelers of frozen fortitude don their craziest costumes and sprint into the spray on Assateague Beach. All but the craziest sprint right back out again: shivering but proud and valiant, for they have successfully overthrown all natural urges to avoid such tomfoolery and given their all for the Chincoteague Polar Pony Plunge.

If the waters prove too cold – minus 11 degrees Fahrenheit or colder – the “plunge” will turn into a “dip” and immersion will be restricted to singular body parts, such as an arm, leg, hand, or foot. Fun is one thing, hypothermia is another (which also explains the Plunge Waiver and Release Form you’ll need to read and sign before participating).

And it’s not just the plunge – you’re wearing a costume because there will also be a Chincoteague Polar Pony Plunge Costume Contest with categories and prizes! You don’t have to wear a costume to do the plunge, you don’t have to do the plunge if you’re in the costume contest, and all who attend have the opportunity to purchase a 2015 Chincoteague Polar Pony Plunge t-shirt as proof of your – er – bravery! Yeah, that’s it …