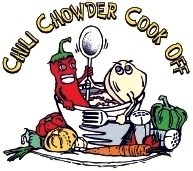 The 2015 Chincoteague Island Chili Chowder Cook-Off is a chance for regional chowder and chili chefs to show off their skills and inventiveness. Even better, it’s a rare opportunity to sip, sample, and sup from some of the best and freshest chili and chowder variations – then vote for your favorite!

Each year sees various fascinating and tummy-pleasing variations of these classic, comfort-food favorites. Prepared in secrecy, the dishes may be from secret, family recipes handed faithfully down, generation after generation, or simply the inventive genius of a clever culinary artist eager to put your taste buds in a tizzy.

Alongside all the wonderful chili and chowder variations will be other traditional comfort-food offerings, such as hot dogs, hamburgers, ice-cream, and delicious beverages to wash it all down with. Attendees to the Chincoteague Island Chili Chowder Cook-Off will also be entertained by live music, an arts and crafts show, the ever-popular Little Miss Chili Pepper and Mr. Hot Stuff competition – and, of course, the new tradition of the Chincoteague Island Classic Car Show!