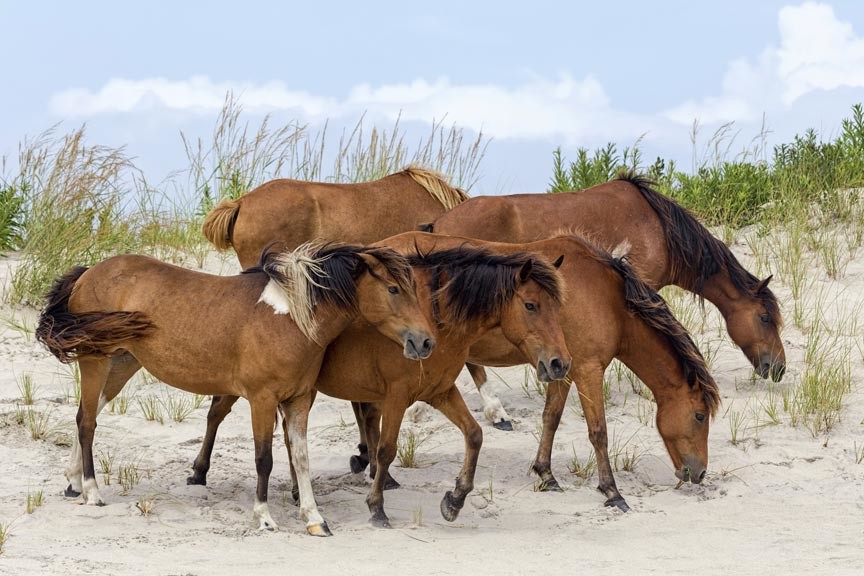 Come see the Wild Ponies of Assateague during the 2016 Spring Pony Roundup!

April 1st and 2nd are the dates set aside for the 2016 Spring Pony Roundup on Assateague Island – the bi-annual opportunity to see the beautiful wild ponies of Chincoteague!

The Chincoteague Volunteer Fire Company rounds the ponies up three times a year. Once in summer, for the annual and famous July Pony Swim and Auction (July 27, 2016 – by the way), then two more times in the spring and then fall for an overall health check to see if any new foals have been born.

The summer Pony Swim and Auction are the most popular and crowded pony-related event here on Chincoteague, providing wonderful opportunities to soak up island life via the annual Fireman’s Carnival and – of course! – the awesome spectacle of the wild ponies swimming Assateague Channel.

While neither the fall or spring pony roundup offer as much drama and excitement of the carnival, swim, and auction combo, they still offer a unique opportunity to view the fascinating and beautiful wild ponies of Assateague Island up close.

Because there are two separate herds of wild ponies living on Assateague Island, a northern herd and a southern herd, both the fall and spring pony roundup occur over two days, one day per herd, and in two different locations.

The northern herd’s roundup occurs Saturday morning, well up the service road to the northern end if Assateague – a three mile hike, one way. Consequently, this portion of the spring pony roundup is less attended, if still just as fascinating. The northern herd roundup and check-up takes a number of hours longer than the southern herd due to its remote location and larger size.

No matter how much of the Chincoteague spring pony roundup you attend – one or both days – you’ll be rewarded with life-long memories of an endlessly inspirational experience! Come see the wild ponies of Assateague!

Chincoteague Lodging for the Spring Pony Roundup
Every year, thousands of people make the journey to Chincoteague Island from all over the world to see the wild ponies of Assateague – but only a few will be able to realize the true comfort and hospitality of Miss Molly’s Inn Bed & Breakfast. Book your stay at our Chincoteague Island B&B while there is still room! See you then!